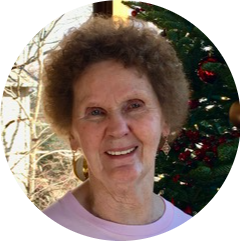 Mary Lee Gunby Young, 86, of Upper Marlboro, MD passed away peacefully at home with her family by her side on Saturday, June 25, 2022.

Mary was born September 7, 1935 in Marion Station, MD to the late Miles and Ethel Gunby. Growing up on a farm, she developed her love of animals, her enjoyment of cooking with fresh vegetables, and her appreciation for the value of hard work.

She attended Crisfield High School in Crisfield, MD and later completed training in office administration at the Jefferson School of Commerce in Salisbury, MD.

In her early career, she worked for the US Government Dept of Housing and Urban Development (HUD). She then worked as a personal office administrator for US Congressman Ken Holland on Capitol Hill and later worked for the director of the Communication Satellite Corporation COMSAT.

Later, she married the late Lt Commander Elbert D. “Al” Young of the US Airforce in 1982.

She was a collector of antiques and vintage novelties and enjoyed travelling the world on cruise ships and expeditions. She was an avid reader of both fiction and non-fiction and was well versed in U.S. and world history. She conquered alcoholism in her early life and became a senior spokesperson and a Sponsor to many in the AA organization.

Those who knew her will remember her for her perseverance and determination to live life to the fullest and to conquer all challenges.  She was known for her love of travelling and exploring many of the modern and ancient wonders of the world.  Her positive energy, wonderful sense of humor, and dauntless enthusiasm were hallmarks of her life.  She will be remembered most for her unwavering and steadfast love for her children and her family.

Memorial donations can be made on-line to the Breast Cancer Research Foundation (www.bcrf.org) in memory of Mary G Young.

To order memorial trees or send flowers to the family in memory of Mary Gunby Young, please visit our flower store.