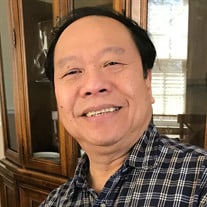 Sixto del Rosario Acap, 71, was granted his wings on February 26, 2022. His wife of 39 years, Gloria B. Acap, and his daughter, Dr. Rosalea Acap Knight, with her husband Daniel Knight, were by his side. His final days were spent surrounded by family. Sixto was born November 17, 1950, in Iloilo, Philippines to Benito Acap Sr. and Adoracion del Rosario Acap, who both preceded him in death along with his brother Querico Acap. He graduated from the University of San Agustin with a Bachelor’s of Science in Medical Technology in 1972. He then joined the United States Air Force, where he proudly served until 1982. Sixto and Gloria met at Southern Maryland Hospital. They were married in March 1982, and were blessed with one daughter, Rosalea Knight. He absolutely loved Rosalea, who gave him his two adored grandchildren, Maria Rosa Knight and Christopher Lane Knight, for whom he would have given anything. He finished his career as a Medical Technologist at Fort Washington Hospital in 2015. In his retirement, he spent his time fishing, being with his family, and spoiling his grandchildren, whom he loved so much. He was known for always having candy in his pocket for them. He leaves to cherish his memory, his wife Gloria B. Acap, daughter Dr. Rosalea Knight and her husband, Daniel Knight and their two children Maria Rosa Knight and Christopher Lane Knight. His four brothers: Warlito Acap, Benito Acap Jr, Constantino Acap and Mario Acap, three sisters: Dr. Lilia Acap, Mercedita Pineda and Ofelia Olivares and a host of nieces, nephews, other family and friends. The family will receive friends at Lee Funeral Home Calvert 8200 Jennifer Lane, Owings, MD 20736 on Thursday, March 3, 2022 from 2:00 pm - 4:00 pm and 6:00 pm – 8:00 pm where a Funeral Service will be held on Friday, March 4, 2022 at 12:00 pm in the Funeral Home Chapel. Interment will follow at St. James Parish Cemetery 5757 Solomons Island Road, Lothian, MD 20711. To send flowers or a memorial gift to the family of Sixto del Rosario Acap please visit our Sympathy Store.
To order memorial trees or send flowers to the family in memory of Sixto del Rosario Acap, please visit our flower store.