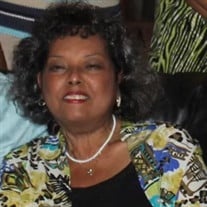 Yvonne Ristina Countee departed this life on January 13, 2022, at Adventist Healthcare Fort Washington Medical Center, Fort Washington, Maryland. She was born to Miriam Anita Wright and Stanford Alexander Wright in Bluefield, West Virginia. Yvonne grew up in Bluefield, West Virginia and attended Sacred Heart school before relocating to Northeast Washington, DC, and Glenarden, Maryland. She graduated from McKinley Technology High School in 1962, and then studied pharmacy at Howard University. Yvonne met the love of her life, Aaron Francis Countee, Sr. in 1962 while standing at a bus stop in Washington, DC. Aaron had seen her at the bus stop a couple of times and was afraid to talk to her. He finally got up the nerve to ask her out and she eventually said yes! The two married on January 26, 1964, at Church of the Incarnation (Incarnation Catholic Church) in Northeast Washington, DC, and to that union three children were born, Angela, Anita, and Aaron, Jr. Yvonne accepted the Lord and Savior Jesus Christ at an early age in Bluefield, West Virginia. She was a dedicated member of St. Columba Catholic Church in 1975 and became a member of Mt. Ennon Baptist Church in 2011. She was a member of the Golden Circle and Greeters, and several choirs, including Senior Choir, Consoling Choir and Gospel Unity. Yvonne worked for the Federal Government for almost 43 years. She started her career at Public Health Service and then moved to Council on Environmental Quality before retiring from the Environmental Protection Agency in 2008. Playing the piano was a large part of Yvonne’s life growing up. Aaron always enjoyed hearing her play. Yvonne also enjoyed fashion. She was very stylish and loved looking at fashion magazines to stay on top of the latest fashion trends. She loved fine jewelry, purses, scarves, and shoes. Yvonne had a quirky yet delightful sense of humor where she left no joke untold. Yvonne was an avid reader and enjoyed watching movies, playing word games, and listening to music. She also enjoyed joking around with Aaron, watching Dancing with the Stars, feel-good Lifetime movies, and wedding shows. Her favorite enjoyment was her family, particularly her grandchildren and great-grandchildren. Yvonne is preceded in death by her parents, Stanford and Miriam Wright, and brother Ronald Wright. She leaves to cherish her memory: her beloved husband Aaron, daughters Angela (Rodney) and Anita (Steve), and son Aaron, Jr., her brother Raymond A. Wright (Gary), and ten grandchildren, Shaunice, Brittani, Chade’, Rodney, Jr., Kyree, Isaiah, Jaelynn, Noah, Mathew, Jamari, and two (2) great grandchildren Cameron and Kaelani, and a host of relatives and friends. To send flowers or a memorial gift to the family of Yvonne Ristina Countee please visit our Sympathy Store.
To order memorial trees or send flowers to the family in memory of Yvonne Ristina Countee, please visit our flower store.